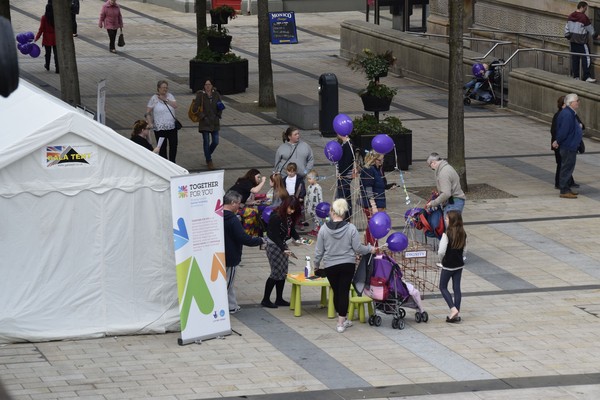 Together For You celebrates reaching over 30,000 people as part of World Mental Health Day in L/Derry

The Together For You partners were out in force on Saturday (10th October) raising awareness of ‘Dignity in Mental Health’ as part of World Mental Health Day in the Maiden City of L/Derry.  It was also an opportunity to celebrate the fact that they have reached over 30,000 people across Northern Ireland with mental health services. Together For You is a mental health and wellbeing project funded by the Big Lottery Fund.

Hundreds of shoppers and passers-by stopped to have a cup of tea and a natter with the team of volunteers, helped to decorate the ‘Ship called Dignity’, supported by the Community Arts Partnership, and were entertained by Face painters, dancers from Echo Echo Dance, laughter yoga from the Sunshine Project and singers from the excellent Encore Contemporary Choir. 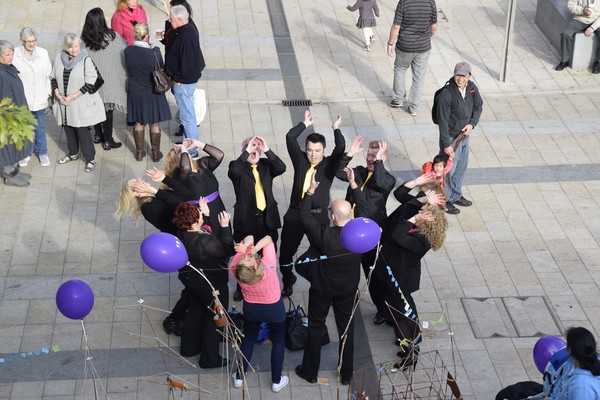 The Deputy Mayor of Derry and Strabane Council, Alderman Thomas Kerrigan came down to support the event, and local MP Mark Durkan also popped down to see some of the activity taking place. 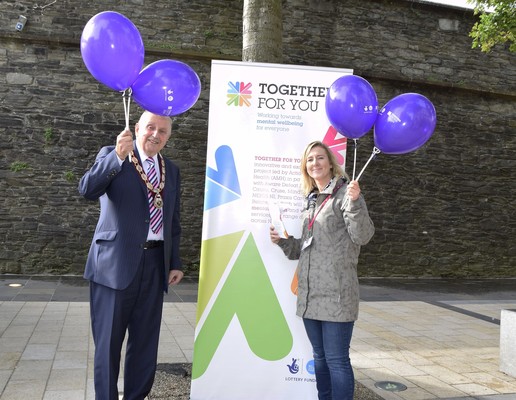 Throughout the day, we took a short poll of passers-by.  Out of the 62 people questioned, over 43% had accessed mental health support services for themselves or a friend or relative.  Many people (over 50%) admitted to having had or still to have problems with anxiety, stress and depression. However it was fantastic to see that over 80% felt comfortable talking about their mental health, and also a similar number who said they would visit their GP or talk to a friend or relative if they were worried about their mental health.

The team at Together For For were also celebrating the fact that they had reached over 30,000 people across Northern Ireland since the launch of the project on World Mental Health Day in 2013.

Amanda Jones, Project Manager explains “The success of this event today in Derry/Londonderry builds on the success of the project as a whole.  Reaching over 30,000 people in Northern Ireland is a fantastic achievement for the partners of Together For You.  It also means that over 30,000 are more likely to talk about their mental health to others, to seek help when they suffer mental Ill-health and to contribute to reducing the stigma surrounding mental ill-health. Today in Guildhall Square we built on that growing momentum with a fantastic promotional event. Thank you to all who came to visit us”.

1)     Deputy Mayor of Derry and Strabane City Council welcomes Amanda Jones, Project Manager for Together For You to Derry to highlight the need to raise awareness of Mental Health as part of World Mental Health Day on Saturday 10 October in Guildhall Square. The event was funded by the Big Lottery Fund.

2)     Encore Contemporary Choir entertains the people of Derry as part of World Mental Health Day celebrations on Saturday 10 October organised by Together For You, a project funded by the Big Lottery Fund.

3)     Members of Encore Contemporary choir and members of the public take part in Laughter Yoga facilitated by the Sunshine Project as part of World Mental Health Day celebrations in Guildhall Square, Derry organised by the Big Lottery Funded project Together For You.