Partners call on next Government to make five key commitments 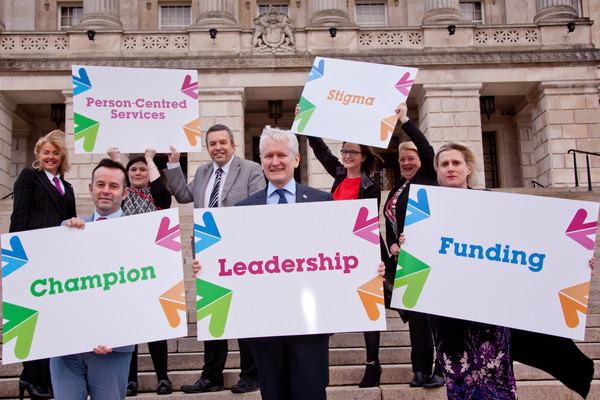 The Nine leading charities within Together For You call on all the political parties to commit to ring fencing funding for mental health, and providing better leadership on the way forward in the post Bamford era.

The charities, which include Action Mental Health; Aware NI; CAUSE; Cruse; MindWise; Nexus NI; Praxis Care; RelateNI and The Rainbow Project have supported the findings of the recent ‘Regress, React, Resolve?’ report produced by Queens University calling for the appointment of a Mental Health Champion for Northern Ireland. Last week the Royal College of Psychiatrists also called on the Executive to support the call for a Champion.

In 2011 the Department of Health, Social Services and Public Safety deemed mental health to be one of the four most significant causes of ill health and disability in Northern Ireland along with cardiovascular disease, respiratory disease, and cancer (Service Framework for Mental Health and Wellbeing, 2011).  Despite this however, over the last six years spending on mental health services has shown a decline in spending of 26% while spending on primary care services has shown an increase of 136% (Queens University Belfast Report, 2015).

The impact of this disparity in funding is stark, as David Babington, Chief Executive of Action Mental Health, explains  “the cutbacks to already underfunded mental health facilities has devastated those who deeply rely on them to receive professional help and who are subsequently having to wait longer to receive care due to lack of government funding and support.

Representatives from nine leading mental health charities have come to Stormont today because we desperately need a functioning government to work for mental health and help organisations like ours to provide services for people across the region.”

Together, these nine organisations have identified five key commitments for the next government which, if implemented, would dramatically improve the lives of those living with mental ill-health and create a fairer and more equal funding platform for mental health services.  These include:

Without these commitments met, mental health service provision falls short of the Bamford Vision for future service delivery, falls short of the expectations of voluntary and community organisations providing support, and ultimately falls short of those currently suffering from mental ill-health in Northern Ireland, an estimated 20% of the population (Chief Medical Officer, 2010).