Stories on support from LGB&T Groups through Rainbow Project

Below is some of the stories of the benefits of the support groups developed in rural areas of NI through the work of The Rainbow Project.

"I grew up in Fermanagh but have been lucky enough to live, work and study in other places. I returned to Fermanagh as I liked the way of life and to be close to family. I joined the LGBT group as my partner was keen to see what the group entailed and I was keen to meet more LGBT people in our community.

From the outset we were made to feel very comfortable by everyone and we were able to speak openly on a range of issues. These sessions helped my understanding of not only the difficulties faced by the people in our isolated rural community, but also the issues faced in the wider LGBT community. The group provided training so that our members can hopefully continue to support other people in the local area in the future, especially in respect to mental health issues. The training will also help me to understand the variety of people that may be struggling to understand who they are and with the isolation they can experience.

My experience of the wider community in Fermanagh has mostly been supportive but there have been times when people with narrow views have sought to alienate and demean who I am. Only by standing together in a group, can we get society to acknowledge that our rights are as valid as everyone else’s and that we deserve to live with the freedoms and privileges afforded to others.

In conclusion I am glad I found the LGBT group in Enniskillen as it has helped me to grow and I hope the group continues to provide support for all in our area."

"Some years ago I felt very isolated as I was brought up in a rural area where I felt that I was the only gay person for miles. Over the years I heard and absorbed many negative comments as peers quickly pick up on difference hence bullying was commonplace at school etc.

Years passed and I was fortunate to meet someone special and have been in a long term relationship for the past 15 years. I felt that all the stigma from the past was gone and no one or few people experienced what I had growing up.

It was only when my daughter came out about two years ago that I realised that this was not necessarily the case and that homophobia was alive and well as her experience was similar to what mine had been when I came out.

I became aware of a small group of LGBT people who were meeting monthly in Ballymena and started to go every month.

I attended a personal development group and this really gave me the opportunity to,

Going forward I would like to see the group in Ballymena develop to give young LGBT people a voice as in my experience many continue to feel marginalised ,isolated  and unable to discuss matters with family etc.

It is important that the groups currently in place in the North are given the opportunity to develop and give LGBT people a safe place to meet other likeminded people and grow in their identity.

I wish to thank The Rainbow Project and Together for You as being part of the group has had a positive impact on me and my mental wellbeing.

Becoming a member of our Enniskillen Peer and Social Support group has been an amazing experience for me on so many levels. I met my partner almost two years and have happily lived together with him in a same-sex relationship in Fermanagh for over a year now. For a time I believed I was living in a town and county where diversity was celebrated and everyone was happy to be open and honest about who they are and use their differences as strength to bring people together.

It wasn’t until I began looking for others in the community that I realised the sad truth, the LGB&/T community are still shrouded in a veil of a false sense of “gay acceptance”. Ignoring social issues experienced by LGB&/T people is actually keeping those people hidden and isolated within their own communities. The false web of acceptance covers them so well that I honestly believe most heterosexual people have no idea of the struggles some people are facing right on their doorsteps; neighbours suffering on the other side of the fence, their children struggling to find out who they are and scared to talk about it with their own parents, even those who are in relationships/marriages who are in emotional turmoil and have felt the need to maintain traditional family values and bury who they are in order to stay within so called social norms to keep others happy.

As a young man I grew up in a different community in Antrim which had many of its own social issues, just being a man was difficult in its own right for lots of reasons with conflict and deprivation still apparent in the town to this day. Being a young man unsure of who he was and his sexuality on top of all this was even harder. Growing up I’ve heard countless homophobic comments and it almost seemed “normal” and acceptable for most of my life. People would laugh and join in homophobic jokes and make fun of LGB&/T people. I can’t remember a single case in which someone stood up and said it was out of line and I was too afraid to say anything myself though fear of becoming a target.

“Poof, fag, queer, ass’s to the wall, here comes the fruit” – statements like this wouldn’t even raise an eyelid. For some reason society seems to have been just numbed to the words, and many people don’t even realise that there’s others who could be very hurt and deeply affected, so much in fact that it could affect their mental health. On the other hand, you could talk to almost anyone about whether they knew any gay people and they will all tell you, “I have a cousin who is gay….I have an uncle who is gay……my best friend’s sister-in-law’s daughter is a big butch lesbian and she’s lovely. I have no problem with them, live and let live eh….”. It’s as if LGB&/T people are just up for opinion and it’s okay to make fun of them, bully them, harass them or worse, because sure we all know one that’s dead-on.

As I get older I’ve become more and more frustrated with how LGB&/T issues are not being taken seriously by our politicians. We have people in power who are quite literally ignoring what the public want and abusing their powers to keep LGB&/T people segregated in society. I want to be able to get married to my partner someday, I want to be equally recognised under law and by society as a man who loves another man and that my love is not some forbidden sin under faith or a product of an unconventional upbringing. My love is a good thing, and powerful, just like everyone else’s on the planet, I cannot help who my heart fell for. Civil partnerships won’t be enough for me. I would love more than anything to adopt children if I cannot have any of my own. I want my partner at my bedside when I am an old man and for him to be equally recognised as my spouse. I want my blood to be seen as “good enough” and “clean enough” for those who desperately need it in this country and for my organs to help save lives when I’m gone. I am not a second-class citizen.

The Enniskillen LGBT group is needed. Where better a place for like-minded people to chat about these issues and get weight off their shoulders. The group has connected me to people with life experience I could never have dreamed of and who not only listen but understand the views I have on the way society is treating us. At my first meeting I was so happy to just chat and let of out a sigh of relief that I can openly express my feelings to others. I have loved the opportunity to not only discuss the negative stuff but also to share with others the happy experiences I have had in Enniskillen too. My partner and I have held hands, had the odd cheeky kiss, and even danced openly in lots of places in town and have been received positively by plenty of the people we meet.

This group will provide us with a platform in the town to bring LGB&/T together and to help improve our lives and the lives of others. Something needs to be done, and this group could be a base for at least beginning to address the issues that more rural counties face. We can’t have a society with a feeling of togetherness if we are all apart. Providing a safe place to meet is a start, and it’s exciting to know what the future holds for the rest of us out there.

I have got a lot out of the LGBT groups. I am more open about my sexual orientation with friends and family.  I have met a lot of new people who are in the same situation as myself.  I also have met a great couple from last weekend’s residential and they have given me a lot of advice about men and relationships. I also learnt a lot on mental health and how to ask the hard question that anyone would dread to ask someone, ‘‘Are you thinking of suicide?''  The Rainbow Project councillors and Staff are so understanding and have helped me with the loss of my cousin and I hope to keep going to them for support and hope to meet a lot more men and women from the LGBT communities.

For more information on the support groups available in Armagh, Enniskillen, Ballymena and Omagh, please contact Nuala Devenny on 9031 9030 or email nuala@rainbow-project.org. 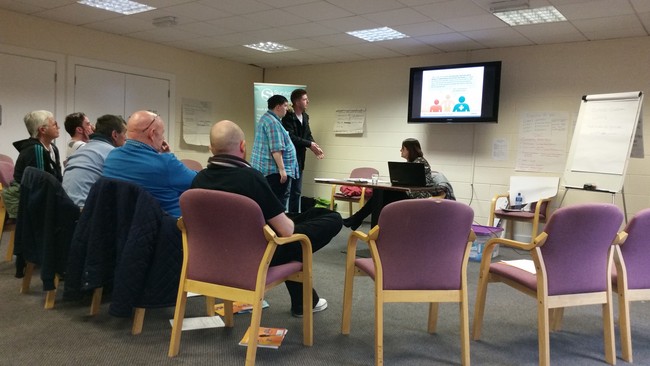