St Benedicts School in Randalstown have recently gone through some 'Internet Safety' Training from Nexus NI.

Nexus NI, as part of the Together For You project funded by the Big Lottery Fund, recently delivered its ‘internet safety’ session to Year 8 students at St Benedicts School in Randalstown.

Mr. Pascale McKendry, Head of Pastoral Care at St. Benedicts College, Randalstown, said “Social media is now an important part of many young people’s lives. Most young people have a profile on social networking sites such as Facebook and Twitter; sites such as these provide an opportunity to stay connected with friends and family. However, the growing popularity of social networking sites among teenagers is causing concerns about privacy and security.”

Judith Boyle, Education Worker from Nexus said “We have been getting fantastic feedback on the training delivered.  Many pupils, and indeed teachers, are not aware of the dangers online or how to keep their information safe”.

To date Nexus NI have reached over 4,000 pupils across Northern Ireland with this training.  If your school is interested in availing of this free training, please contact Nexus NI on 028 7126 0566.

Judith Boyle, Education Worker from Nexus Ni, is pictured with Year 8 Students from St Benedicts School, Randalstown.  Judith has delivered a range of internet safety talks to several year groups in the school as part of the mental health and wellbeing project Together For You, funded by the Big Lottery Fund.  Nexus, under the project, also provide specialist counselling for survivors of sexual violence and abuse (16yrs – 26yrs) and preventative workshops in post primary schools including internet safety and childhood sexual exploitation.  For further information or to book a workshop please call 028 7126 0566. 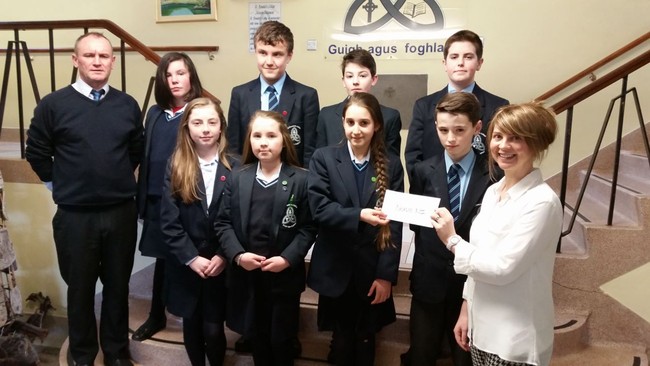